Manatee Surrounded By Fish — The Story Behind The Shot

The cover of the new issue of Alert Diver, Winter 2014, showcases a manatee photograph of mine that I’m very proud of. Here is the story behind the shot and a few other interesting tidbits! 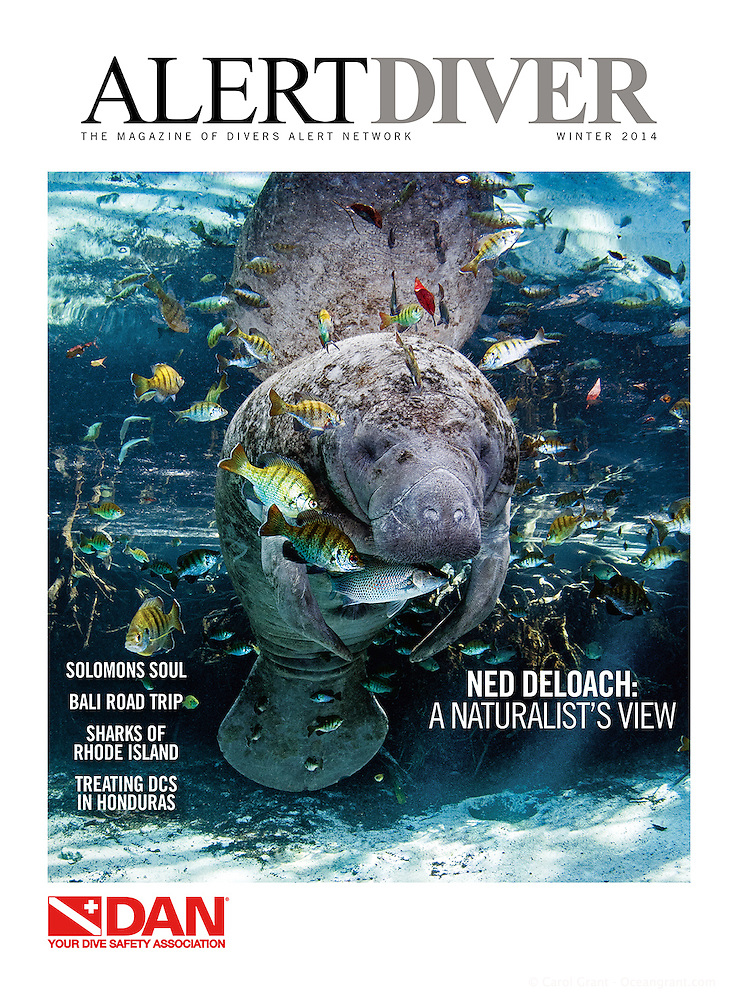 Florida experienced a prolonged, record-breaking cold spell, during the first half of January 2010. Later in the month air temperatures moderated but the surrounding waters were still quite cool. Manatees seek out the warmest water possible and so do a number of species of fresh and saltwater fish, wintering in the springs. On January 28, 2010, the warm freshwater of Three Sisters Springs was beautifully blue and I was eyeing the large numbers of bream (Lepomis spp.) and mangrove snapper (Lutjanus griseus) gathering. When I caught sight of this male manatee floating and warming his back in our famous Florida sunshine, I was captivated at this portrait. As a bonus some of the many bream surrounding this big rotund herbivore began to encircle his snout along with a lone mangrove snapper. It went through my mind that it was quite curious there was just one snapper present as they usually hang out in schools or at least several individuals together seeking yummy bits in the sand around the perimeter of manatees. I peered at the snapper while thinking, ”What are you up to fella?” And as I framed the shot he hid even more under the manatee’s snout, like he did not want to be recognized — a thief in the night! Click — success — and I even got the guilty look on the snapper!

It is common for these fish pictured and others to inhabit freshwater Florida habitats during cold winter months. Manatees also use these springs as their vital natural warm-water refuges. So it’s inevitable that fish and manatees meet while sharing the treasured real estate. While manatees try to warm and rest undisturbed, some opportunistic fish seize this chance to nip on their captive audience for a free meal. Bream target dead skin and the manatees are pretty good at ignoring them as long as the fish don’t nip too deep. Here’s a write-up I did on the sometimes uneasy relationship between fish and manatees called “Something’s Fishy In The Springs”.

Now that lone mangrove snapper, I have no idea what he’s up to, but it looks like he’s up to no good if you ask me! Known as an “opportunistic predator” does this snapper have a taste for baby bream, as I’ve never seen a snapper nip at a manatee? Or is he looking for something else tasty? I guess you have to ask him…

This shot was taken around 3pm in a tree-shaded area, but where a lot of strong sunlight streams into the springs to frame the subject. The manatee was relaxed while he warmed himself and seemed truly interested in my underwater dome port reflections. I am always on snorkel photographing manatees and this shot was one unique shot, no other similar frames where these characters all came together. Keeping steady while floating is tricky. The best advice I can give regarding photographing manatees is to observe the animals carefully and act like one!

I used a Nikon d300 in a Subal Underwater Housing and 8 inch dome port. The camera settings were 1/60, f8, ISO 400 and two Sea and Sea 110 strobes on low to fill shadows and bring out highlights in the fish. An awesome lens for underwater use, the Tokina 10-17FE, was at 13 mm.

Then in the fall of 2012, Jennifer Worthington, the talented Director of Marketing and Graphic Design for Visit Citrus, chose this photograph for their beautiful new redesigned Official Visitors Guide. To top it off I was honored to be given an award plaque at the Citrus County Commissioners meeting in January 2013 from the Citrus County Convention and Visitors Bureau.

I’ve photographed a lot of underwater life, especially manatees as they are my passion. “Manatee Surrounded By Fish” seems to resonate with so many people. Is it the plucky cuteness that all manatees seem to exude? Or is it the fish encircling the manatee who is taking it all in stride? Maybe it’s the lovely light piercing through the trees and entering the water in a dance-like fashion? Whatever draws people to this picture, my wish is that the image does speak a thousand words of conservation and preservation of this unique marine mammal and it’s shrinking underwater natural habitat.