Expanding on my post March Manatees Part 1, this March 2014 has been an interesting mix of frisky manatees, mothers and calves, blue spring water and as always the twist of some very intriguing manatee tidbits! 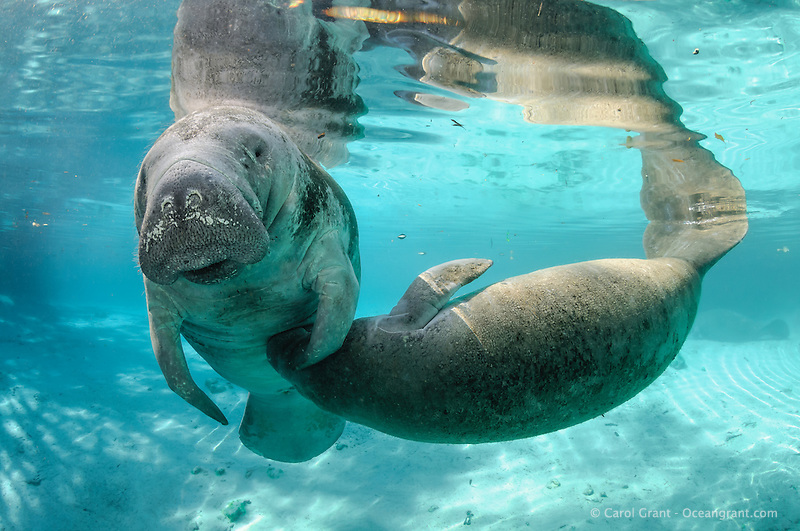 Beginning where the last post left off, many of my friends wanted to know more about this frisky male calf growing up and his doting mother. I mentioned what Dr. Bob Bonde told me about this behavior in the previous post. Since I’m very exacting about going to the most reliable source for information, here is what Bob said to me in an email after my first observations of a calf nursing from his mother and then playing intimately with her:

“The first [photo] is likely the male calf expressing sexual interest in its mom.  When this reproductive curiosity get too overt, it is a signal to mom that it is time for weaning.  The activity will also extend to other males during their social interactions with cohorts. I doubt the male calves are ever successful at an impregnation at this stage of their development.”

This explanation from Dr. Bonde really makes sense, especially as in March mating herds and smaller cavorting groups swim in and out of the springs. The youngsters must pick up on this overtly frisky atmosphere! Manatee mothers are very patient and take everything in stride acting like it is as normal a behavior as can be. In March, mother manatees seem to be even more affectionate with their calves, but still seem to keep a tight rein on them! 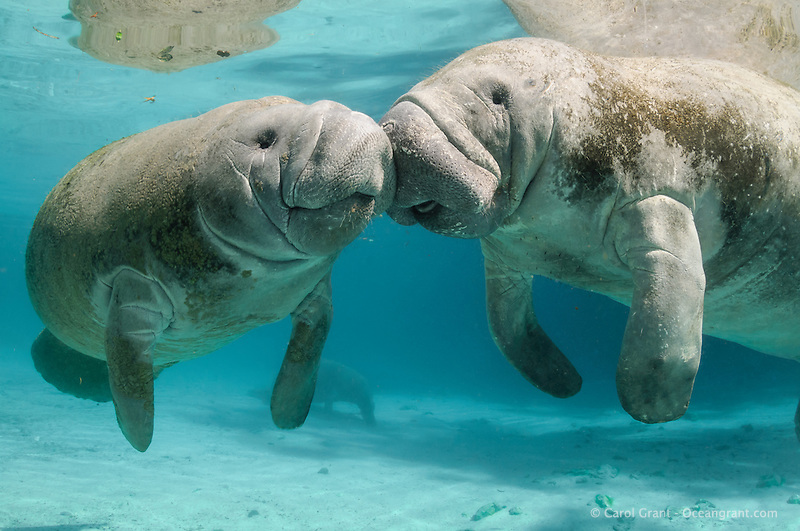 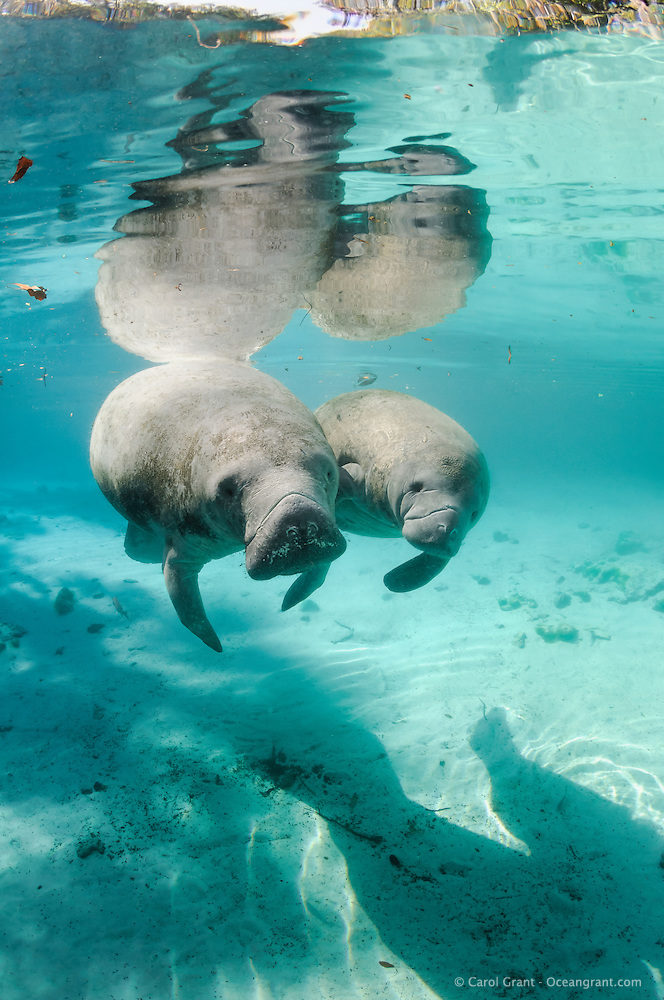 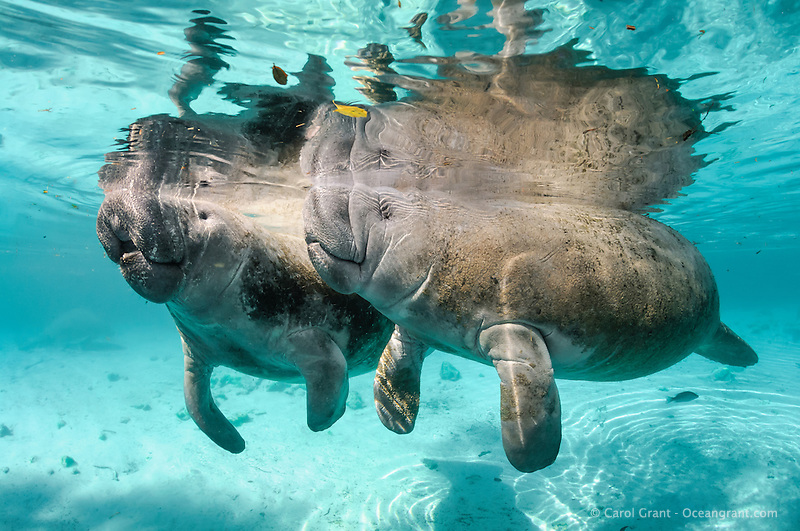 Another thing I love about March is more abundance of the pure blue spring water we love at Three Sisters Springs. I believe this is due to milder weather patterns in March and very strong sunlight. If you haven’t seen the springs in early springtime you must, the light is absolutely magical! A photographer’s dream! 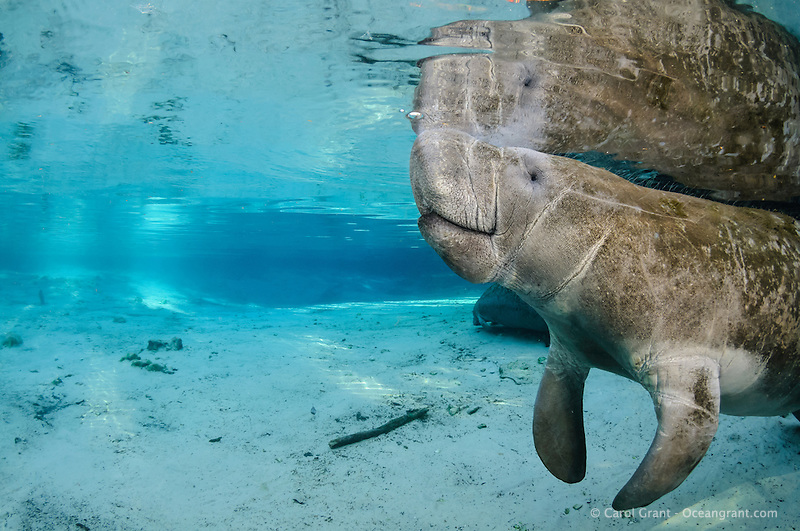 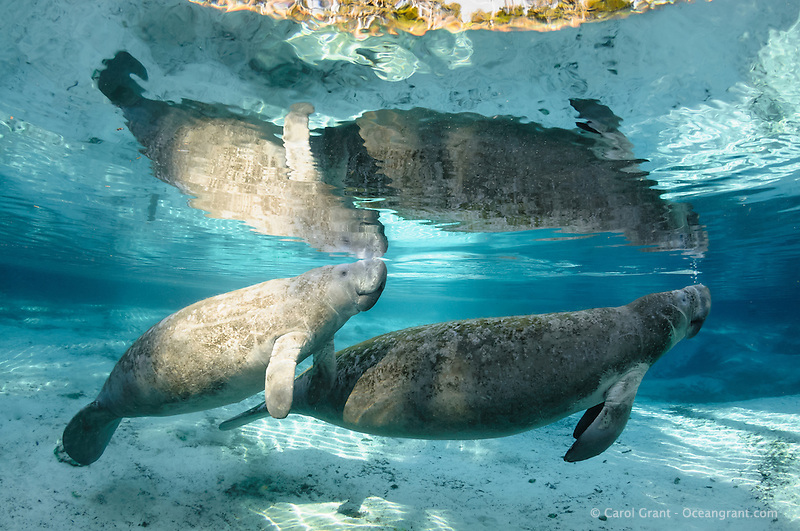 Either early or late in March, it’s lovely if the weather patterns are conducive and manatees choose to stick around the clear water springs. Manatee mothers and calves often surface together to breathe, as many times one seems to trigger the other to take a breath. 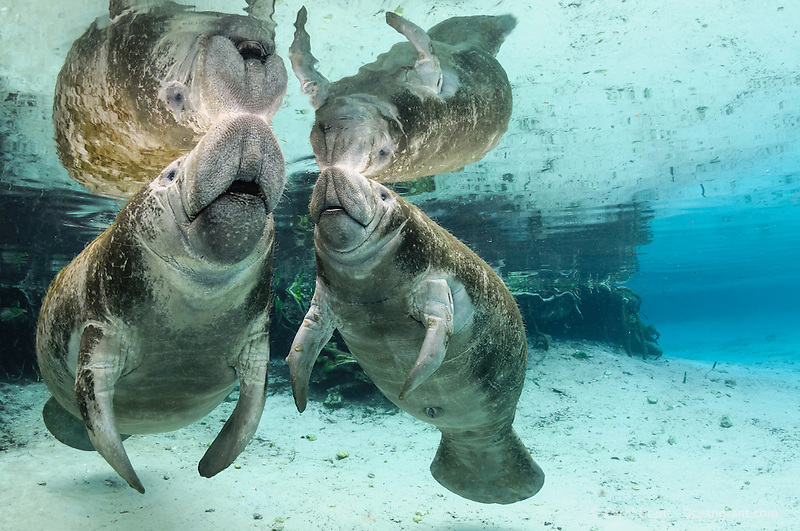 Groups of manatees around the springs usually thin out in March, but not always! In this photograph I count about twenty manatees (not including reflections of course) gathering near this warm spring vent at Three Sisters Springs. Some manatees rest with others behind them and some manatees are actively cavorting in the background. Plus there are additional manatees surrounding the other spring vents. When many manatee gather in aggregations to stay warm, water clarity can suffer a bit, but I think you will agree it is worth it to see so many manatees in one frame! 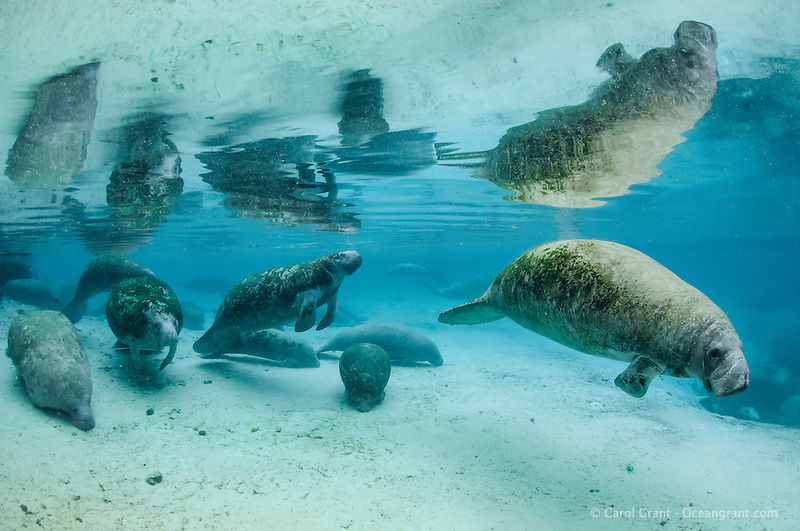 Manatees were in the clear water springs every day except one. I got skunked on March 20th with no manatees at all anywhere near where I was. It’s the first year I’ve been skunked in several seasons as I’ve become pretty proficient at predicting the siren’s presence and blue water. There were so many manatees two days before, but that’s March for you! The 20th was the first day of spring and manatees seemed to know it as I think they sense “Spring Fever” too! Ahhhh, warm water, food and friskiness beckon! Spring has indeed sprung!

Here is the final frame I took at the end of this season on Thursday, March 27, 2014. The manatees stuck around for a few more days after this, but as far as my penchant for clear blue spring water photography and a lack of busyness, this was my last frame of the season. I think this photograph says something peaceful and poignant about the beautiful Three Sisters Springs we are privileged to visit and conserve. Here three of the larger vents of one of the springs at Three Sisters are reflected on the calm surface. A baby manatee surfaces for a breath as his mother rests below. Soon this pair will leave due to the daily tidal flux, but for now it is their exclusive lovely blue haven. 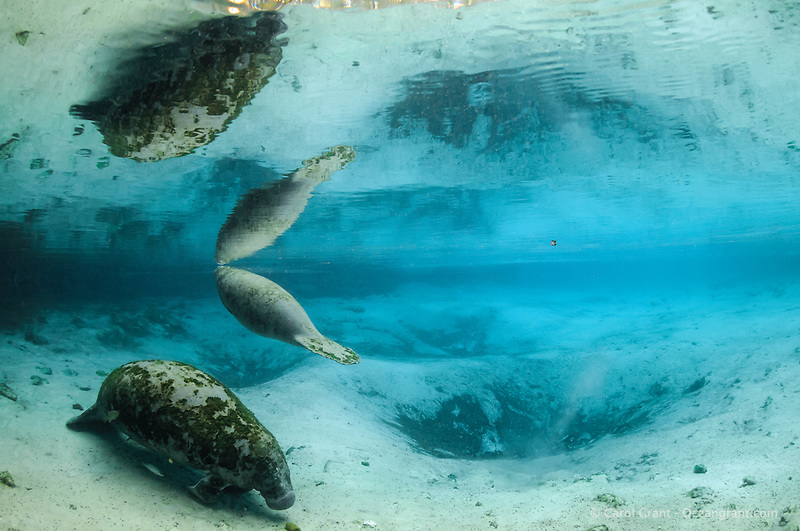